SUSPENSION TECHNIQUE FOR PANNICULECTOMY IN A MORBIDLY OBESE PATIENT

A simplified technique for removal of a large pannus is described. The case presented involves a 63-year old morbidly obese man (more than 500 pounds) with multiple medical problems. Complications encountered when operating on the morbidly obese because of the sheer size of the patient and the body part to be operated on are briefly discussed.

Two operating tables were necessary to accommodate the patient’s large bulk. Preparation of the skin as well as the operative procedure were greatly facilitated by using a hydraulic lift to elevate the pannus. No injuries were sustained by the surgeons of the operating room staff. Total operative time was 2.5 hours, and there were no intraoperative or postoperative complications. This technique may be used to perform other procedures in the morbidly obese that require elevation of a body part. 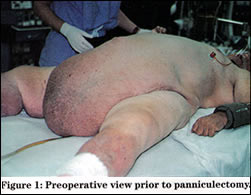 Intraoperative monitoring was performed using an arterial line and a Swan-Ganz catheter. Two operating tables were necessary to accommodate the patient’s bulk (Figure 1). Preparation of the skin and the operative procedure were greatly facilitated by using a hydraulic lift to elevate the pannus. With assistance from the biomedical engineering department, two intramedullary rods (1/4-inch stainless steel) were bent into lifting hooks. The “Ruger hoist” included an extension book with variable standing positions (450, 750, and 1000 pounds) determined by its length (Figure 2). In order to gain maximum extension of the boom for positioning at the side of the surgical table, a total weight of 450 pounds could be elevated safely. The hooks were connected by rope to a gamble that was mounted on the hydraulic lift. (Figure 3)

The total operative time was 2.5 hours, and there were no intraoperative complications. Equally important, no injuries occurred to either the operating room staff or the surgeons in association with the physical difficulty of maneuvering a morbidly obese patient intraoperatively. The entire operative specimen weighed 100 pounds. The estimated blood loss was approximately 450cc. The patient received one unit of packed red blood cells and two liters of crystalloid intraoperatively. No further transfusions were required.

There were no postoperative complications. The patient was extubated with removal of a central line on the second postoperative day. Embolic prophylaxis with subcutaneous heparin was administered for five days until ambulation. Unna boots were placed on the lower extremities every three days to aid in the reduction of edema and as a treatment for chronic venous ulcerations. After one week, the patient was transferred to a skilled nursing facility from which he was discharged on postoperative day 13.

The pathophysiology of Panniculus morbidus was described by Petta et all in 19921. A large pannus creates a vicious cycle of lymphatic and venous congestion leading to further ischemia and lymphedema, ultimately resulting in celluitis, abcess formation, and infarction. During surgical dissection it was ecident that this patient has a markedly lymphadematous pannus.

Surgery in the obese patient has been associated with an increased incidence of complications and mortality including deep vein thrombosis, pulmonary embolism, pneumonia, sepsis, and would dehiscence with fat/skin necrosis. Obesity is commonly defined as being more than 20% over the ideal body weight; morbid obesity is defined as being more than twice the ideal body weight. In a review of the literature published in 1985, Hirsch et al2 found a variable, but nonetheless high (20-78%), incidence of complications following surgery in the morbidly obese patient. Abdel-Moneim noted a 2.6% mortality rate from surgery in obese patients.3 According to Foley and Lee,4 the incidence of would infections in morbidly obese patients is as high as 40%, and would dehiscence is ten times more likely to occur in this patient population. Reducing operative time may decrease the incedence of would sepsis, would dehiscence, and hernia formation.

Various techniques have been described to aid in suspension of the pannus. Richard5 described placement of a rigid bar through the pannus to provide suspension and enhance manipulation. Meyerowitz et al6 described the transverse placement of Rush nails for suspension. The skewered Rush nail method has been modified by bending the intramedullary rods into hooks. Sterilized “shark hooks” also could be used easily. Matory (7) et al described a pannus elevation technique using rope suspension with towel clips and Steinmann pins.

The method of suspension used in this case allows complete surgical resection of the pannus without requiring multiple assistants. The hydraulic lift boom was extended to its greatest length to maintain the sterile field. The nurse controlled the manual pump that is used to elevate the pannus on the hoist. Our biomedical engineers recommended using a thicker rod, at least 3/8-inch in diameter, to prevent the bending that was evident with the 1/4 inch rod.

The technique describes for panniculectomy will expedite the operation, reduce blood loss, and optimize the volume and venous return. Visualization of the vessels is easier and hemostasis is more readily accomplished with reduced blood loss. Prevention of injury to the operating room staff and surgeons also is an important consideration.