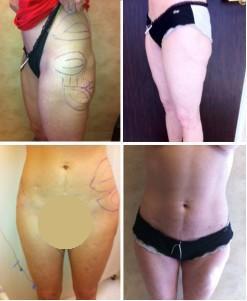 Liposculpture requires finesse, experience and judgment.  Removing just the amount of fat is not always as easy as it may seem.  Apparently, some patients do present with over-liposuctioning which can occur from either inadequate judgment or patients, as in this case, having been operated under IV sedation without an anesthesiologist in which she was in severe pain throughout this procedure and therefore movement on the table may have caused the surgeon to have difficulty in determining how much fat to remove.  In this specific case, she had liposuctioning of her inner and outer thighs, infragluteal folds, lateral buttocks and hip area.  Note, there is a significant amount of contour deformity along the lateral thighs with severe contour irregularities, depressions, as well as asymmetries.  In order to fix this specific patient, she underwent general anesthesia, areas were then micro lipo-sculpted with a small 3 mm triple lumen Mercedes cannula to 1 atmosphere of vacuum suction pressure using the tumescent technique.  Fat grafting was not required, as simply smoothing out and feathering technique from both the localized deep fat deposit areas as well as the subdermal region was accomplished, smoothing out the larger contour deformities.  This was performed on the iliac crest rolls, the lateral thigh region as well as the anteromedial thighs.  Notice the hips have nicely been contoured, giving her less of gynoid appearance and more of a narrowing along the belt region. Liposuctioning under IV sedation or local can be extremely difficult, if not dangerous, and that control of the patient and the patient’s airway is at risk.  As a result, our patients for significant liposculpturing are always placed under general anesthesia, tumescent technique liposuction is performed, and very small cannulas are used in order to smooth out the specific areas and try to reduce the contour undulations and irregularities.