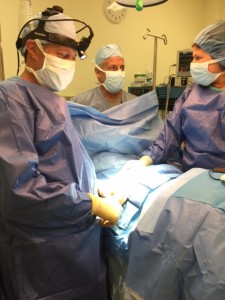 Breast revision surgery is extremely common in patients who have had implants placed in the past and have become pregnant and breastfed after pregnancy. The incidents of scar tissue surrounding the implants is extraordinarily high, and although a specific percentage is not indicated in the literature, in my practice, I see well over 50 to 65 percent of women who have given birth and breastfed to have an increased risk of Baker IV encapsulation. Baker IV encapsulation with scar tissue contracture is associated with a painful and physically hardened breast. Often there is tenderness, the implants are malpositioned, or they simply look distorted or funny in appearance. They also have pain with mild to moderate palpation and disfigurement. There seems to be an increase in scar tissue formation with breastfeeding even more than those who have simply delivered and have decided not to breastfeed. Whether or not to replace the saline or silicone implant with the revision surgery after pregnancy or breastfeeding-induced capsular contracture depends upon the duration the implants have been in place. Also, it depends upon the appearance of the implants intraoperatively.

In my practice, having placed well over 13,000 implants from thousands of breast revision reconstructive surgeries in Beverly Hills, it is notable that patients who have had implants for a shorter period of time (e.g., two or three years) may not necessarily have to remove their implants during the open capsulectomy and circumferential open capsulotomy procedure after pregnancy-induced scar tissue. I do each surgical patient on a case-to-case basis, depending upon what I find in the operating room. The implants may or may not need to be replaced. Implants over five years of age normally will be removed and replaced with the open capsulectomy. This is my general rule that has been successful over the last 17 years. In general, saline/silicone are replaced between 10 to 12 years postoperatively regardless of pregnancy- or breastfeeding-induced capsular contracture. Scar tissue is extremely prominent in women who have just delivered and especially those who have breastfed for an extended period of time. It appears that scar tissue contracture, which is associated with increased collagen formation as well as myofibroblast zones that are responsible for the contraction and the impingement upon the implant, increases during the lactation period of the post-pregnancy and delivery. 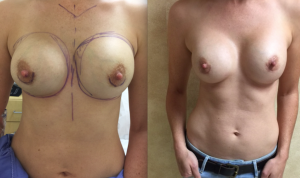 Again, patients who have had implants for the last couple of years may not necessarily need to replace the implants. This can be determined in the operating room by close inspection and integrity of the implants. The implants can be removed from the pocket, inspected, placed into an antibiotic irrigation, and then replaced back into the pocket. This, however, is something that is personal between the patient and the plastic surgeon. Pregnancy-induced capsular contracture can lead to a tremendous variation disfigurement of the breast. There is often significant hardness associated with the implants becoming malpositioned. Often they will rise superiorly upward towards the clavicle, and it can lead to a double-bubble deformity where the skin can over-drape the breast, and the nipple can be too low. This operation for double-bubble deformity would require an open capsulectomy, circumferential open capsulotomy, lowering the implant, replacement of the implant as necessary, and a full mastopexy often requiring an anchor scar or a Wise-pattern technique incision where skin is removed around the nipple areolar complex vertically and along the inframammary fold to reshape the breast. Pregnant women with implants should be expecting that there is a very significant chance that they will require breast revision surgery for open capsulectomy softening the pocket as well as possible replacement of the implant and breast lifts as necessary, depending upon how much breast growth has occurred during the pregnancy period and how much loss of tissue occurs after breastfeeding.
To schedule your consultation with Dr. Linder or learn more about breast revision surgery, call our office at 310-275-4513 or fill out our online contact form today.