Correction Of Severe Bottoming Out With Inferior Capsular Sling

The patient to the right presents with silicone gel implants placed submuscular; however, due to poor inframammary fold integrity, she ended up with dehiscence of the inframammary fold and inferior displacement of the implants causing severe bottoming out.  This can easily be corrected by inferior capsular sling in patients who have thick capsule and that is not of multiple revisions.

The patient specifically had a single operation with a formal mastopexy full breast lift anchor scar and silicone gel implants placed in the dual plane.  She had dissent of the implants due to thinning out of the tissue and had significant bottoming out which can be corrected with an inferior capsule sling and secondary inframammary skin excision with tightening down to the subdermis.  This patient underwent an inframammary fold release.  Capsule was then taken along the inframammary fold and resected from the chest wall above the periosteum of the ribs, elevated approximately 2.5 cm and resected of all redundant capsule; 2-0 Monocryl sutures were used to reapproximate the capsule lifting the inframammary fold approximately three-quarters of an inch.  The skin was then excised directly and the superior edges of the open wound skin were then sutured to the deep dermis which allowed secondary inframammary fold tightening.

Her postoperative results were at four weeks showing beautiful elevation of the inframammary fold.  No acellular dermal grafts were needed for this patient as she had ample thickened capsule which can be used to re-advance the fold and elevate it almost one inch. 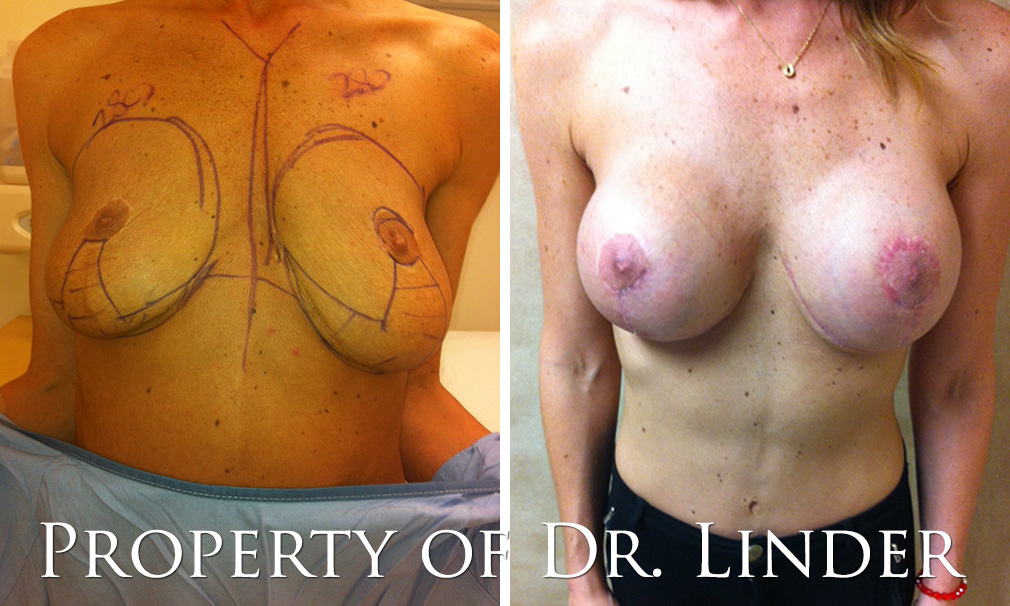 The patient presents with a severe deformity after she had breast augmentation performed by a different surgeon twice, as well as a breast lift.  At this point the implants have fallen to a significantly low level with severe bottoming out as seen in the preop photo.  She also has severe breast asymmetry with the distance from the right nipple areolar complex 9 cm and 12 cm from the left inferior areolar to the inframammary fold.  In order to reconstruct this difficulty deformity, the patient will need to have the implants removed and replaced with high profile saline implants as well as secondary formal mastopexy as well as inferior open capsulorraphy to reposition the inferior capsule superiorly.  The patient’s postoperative photo shows at six weeks, the nipple areolar complexes are now equal and symmetric, found centrally in the middle of the breast, the scars are healing nicely, the patient has nice upper pole fullness, as she desires the high profile, desiring a slightly rounder shape implants.  The tightening of the inferior capsule has brought the implants up nicely, allowing fur superior retropositioning of the implants and complete correction of the severe bottoming out.  Bottoming out can occur due to descent of the skin over time.  This may occur with larger implants and may also be associated technical error where the inframammary fold is lowered too much aggressively by an inexperienced plastic surgeon.  Only Board Certified Plastic Surgeons should be performing this difficult bottoming out procedure.

To schedule your consultation with Dr. Linder or learn more about bottoming out and breast revision surgery, call our office at 310-275-4513 or fill out our online contact form today.