Below are four case studies that can help explain double bubble breast deformity.

Textured implants may create a double bubble deformity meaning that the implant will adhere to the improper position in a superior position and cannot fall even if the pocket inferiorly along the bottom is open. These textured implants are removed, and smooth saline implants can help with this problem. Often, patients have double bubble deformity with ptosis in which the surgeon attempted to do a round block or a nipple-areolar lift, but did not remove skin vertically along the inframammary fold, which leads to a double bubble deformity and a grade 3 ptosis with skin overdrape. This is usually corrected by formal mastopexy using the inferior pedicle Wise-pattern technique or Wise anchor scar technique.

The way I fixed both of the above mentioned specific surgeries was by removing the textured implants, performing an open capsulectomy along the base, both superiorly as well as inferiorly, and completely releasing the thick and hard scar tissue and muscle attachments of the pectoralis major along the parasternal and the lateral inframammary fold. This then allowed the new smooth saline implant to drop. With the patient sitting up, I remarked the Wise-pattern, or anchor pattern, and repositioned the nipple-areolar complex superior, removing the skin vertically as well as along the inframammary fold.

This patient thought she had saline implants, but during surgery, she was found to have Becker double lumen silicone gel implants, which means the implants had a saline exterior and a silicone interior. Note on the photograph, the outer layer of saline has ruptured and leaked out through the shell; however, the silicone remains inside. There is greater underfill of this implant, which required reconstruction using style 45, 550 ccs extra high profile Natrelle® Silicone-Filled Breast Implants, open capsulectomy, and a secondary formal mastopexy. The double lumen shell Becker implants have a relatively thin external shell, and I have seen a significant number of ruptured Becker implants over the last 15 years. I personally do not use these implants, as I prefer to use straight saline or silicone cohesive implants. 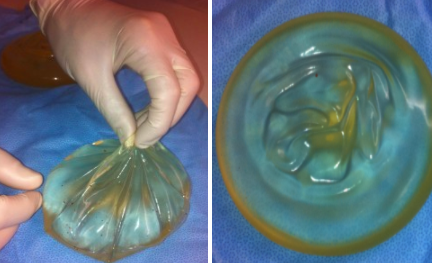 This patient’s before photos show severe bilateral double bubble breast deformity. Notice the left side is worse than the right and the implant is elevated superiorly on both breasts. The nipple is at the very bottom of the breast with skin laxity. There are three requirements of reconstruction for double bubble breast deformity. The first is an open capsulectomy, removing the scar tissue circumferentially around the implant and lowering the bag. The second is the replacement of the implant. I prefer high profile silicone implants in order to maintain some upper pole fullness. The third is redraping of the skin by performing a complete breast lift or formal mastopexy. The patient’s after photos are approximately eight weeks post-surgery. There is still some pinkness to the scars. On examination, the upper poles appear to be symmetric and soft. The implants have been lower to appropriate level. The nipple positions are equal and are found more concentric within the center of the breast rather than at the bottom of the breast. The scar tissue has been released and removed. The patient no longer has pain in her breasts, and it is soft. She has excellent symmetry, softness to touch, and a normal appearance to her breasts at this time.

Double bubble breast deformity surgeries are difficult to reconstruct. Releasing the parasternal attachments of the pectoralis major and often the lateral attachments of the muscle must be performed on a secondary operation in order to lower the implant to the correct position. A very aggressive capsulectomy is performed, which will release the scar tissue into the axillary region and down to the inframammary fold. Finally, a complete breast lift is required, not a periareolar nor vertical, but actually, a complete formal mastopexy is often used to recreate a normal shape to the breast as can be seen in the patient’s after photograph.

The below patient presents with severe Baker IV capsular contracture with malpositioning of implants, done through the transaxillary approach. Her preoperative view shows complete distortion with superior retropositioning of the implant with hardening and a grotesque appearance to her breast. The patient works in the entertainment industry, and this is obviously stressful for her because her breasts do not appear normal.

In order to correct this problem, an open capsulectomy was performed bilaterally. A new implant was replaced and lowered with an open inferior capsulotomy, anterior capsulectomy and a formal mastopexy using the inferior pedicle Wise-pattern technique was performed in an anchor-like fashion in order to remove the redundant skin. Notice, her postoperative view with a normal appearance to bilateral breast, good symmetry, nipple-areolar complex symmetry is excellent, and she now has a normal appearance to her breast.

Double bubble deformities are a challenge. They require experience and judgment. For more information regarding breast revision surgery or to schedule a consultation with Dr. Linder, give us a call at (310) 275-4513 or feel free to contact us via email.