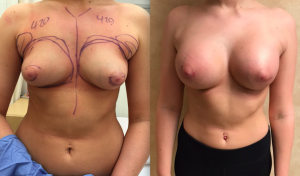 I evaluated a 25-year-old female who was unhappy with not only the size of her breast but also its shape, which was due to her slight tubular breast deformity that caused a poorly defined inframammary fold. In other words, there was no fold along the bottom of the breast, and the flattening of the lower pole did not give her that round shape but rather an almost triangular shape.

During her consultation, she also mentioned that she was looking to remove the fat tissue up by her armpits, which we call “bra bulge.” After listening to her desires and setting her expectations, we agreed to an augmentation mammoplasty and bi-directional lipectomy.

During her augmentation, I placed the 420 cc SRX silicone gel implants under the muscle (sub-glandular placement). I also released along the inframammary fold in a radial striated fashion to round out the lower pole of the breast and removed tubular breast tissue. To address the bra bulge, I made a small incision in the anterioraxillary line just lateral to the pectoralis major border and used tumescent liposuction to remove the fat in this area. 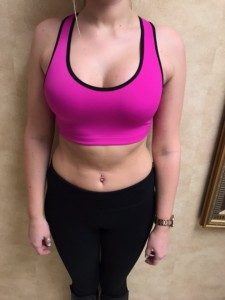 The photo above is three months post op, and she is very happy with the round fullness of her breasts. She is also excited about how she looks in a sports bra now that her bra bulge is gone.

The bra bulge lipectomy procedure is an excellent procedure.  It is relatively non-invasive.  On smaller patients it can be performed under IV sedation and even possibly local anesthesia when it is a small localized bra bulge.  With moderate to severe bra bulge, this may require IV sedation, even general anesthesia, especially if skin resection is required as well.  In the majority of cases; however, tumescent lipectomy in a bi-directional manner can be performed, removing the fat.

Patients often ask how long is the recovery period for this procedure.  It is relatively short.  In fact, patients have gone back to work on postoperative day number one. In general, tumescent fluid is infiltrated into the lateral pectoralis major area and the bra bulge tissue is then suctioned out with a 3 mm triple lumen Mercedes cannula with a small stab incision made along the lateral pectoralis major border, interior to the anterior axillary fold.  Patients are given six weeks of compression garment with a chest wrap.

The suture is removed on postop day seven.  The patient can shower seven days later and is maintained on antibiotics for one week.  Normally, only Tylenol is required for pain management.  However, if a significant large bra bulge is removed, then Vicodin ES may be given.  In general, again, patients can get back to work in 24 to 48 hours.  There is minimal discomfort and this procedure leads to predictable excellent reduction of that uncomfortable lateral fat pad and the embarrassing fat that is seen along the lateral breast region.

To schedule your consultation with Dr. Linder and learn more about breast augmentation surgery or removing “bra bulge,” call our office at 310-275-4513 or fill out our online contact form today.