Tumescent liposuction technique is considered to be one of the gold standards of liposuction surgery performed by board-certified plastic surgeons in the United States as well as throughout the world. Tumescent simply means to place fluid and specific substances or medications within the fat cells. This process shrinks capillaries, which helps to hydrate, reduce bleeding, and harden fat for easier removal in a uniform and consistent pattern.

We have performed the tumescent liposuction technique for many years without any complications. It is an extraordinarily safe approach. We do not usually place more than 3.5 to 4 liters of wetting solution at any time in our patients. Dr. Linder prefers to stage large body sculpting techniques rather than take the risk of using high amounts of epinephrine, lidocaine, or excessive amounts of wetting solution fluids.

Post-operative compression garments should be included for six to eight weeks. Girdles and abdominal binders are used to reduce the swelling as well as to allow for a confluent smoothing effect of the abdomen, hips, flanks, and inner and outer thighs.

We perform our tumescent liposuction technique under general anesthesia, so the patient is completely immobilized and intubated on a respirator. Dr. Linder can perform the surgery without the fear of the patient moving. Any movement on the abdominal wall can be very severe, which could lead to perforation of the abdominal wall with intestinal injury. 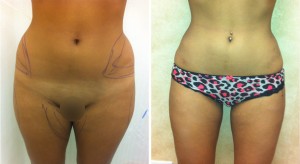 In the pre-op photo, the patient presents with significant lipodystrophy of the iliac crest roll hips, periumbilical lower abdomen, anteromedial and posterolateral saddlebags, and the infragluteal fold banana rolls. This patient underwent a two-liter tumescent liposculpture procedure and is now six months post-op. She is showing a noticeable contour with softened inner and outer thighs and infragluteal fold as well as a reduction of the muffin top and hip area and the periumbilical fat.