The preop photo shows the patient presenting from Missouri, having undergone three surgeries to correct the severe deformity of her breasts.

The patient presently presents with a double-bubble deformity on the right breast with the implant on the right superiorly retropositioned, as can be seen on her preoperative photograph.  She also has a left severe bottoming out with the implant at too low a position.  The position of the areolar at 6 o’clock to the inframammary fold measures at 13 cm.  This is going to be shortened to 6 cm.  In order to reconstruct this woman’s breasts to regain symmetry and a more normal appearance and natural appearance, a left open capsulotomy was performed superiorly.  A bottoming out procedure with the inframammary skin removed as well as vertical skin in an inverted-T fashion on her last three attempts from other surgeons in the mid-west, she had a vertical lift performed on the left.  However, she never had the inframammary skin removed and therefore severe bottoming out occurred due to inability to address the inframammary fold skin laxity. 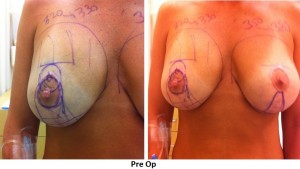 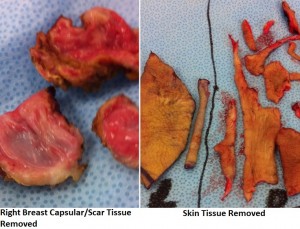 On the right breast the implant is superiorly retropositioned as can be seen by the hatch marks on the right upper pole.  In the operating room an open capsulectomy was performed, releasing the capsule circumferentially, removing scar tissue along the parasternal and the lateral inframammary fold as well as the infraclavicular region.  The implant was now nicely dropped down.  Due to her significant asymmetry, a 320 high profile saline implant was placed and filled to 330 on the right with a 350 style 68 high profile Natrelle implant on the left, filled to 380.  This allowed for perfect symmetry.

Finally, a right formal mastopexy revision was performed.  At this time the right nipple areolar complex needed to be raised with skin removed both vertically and along the inframammary fold.

The postop Day 1 photos are shown, which now shows symmetry of the nipple position, the implant on the right has been lowered and the fold distances are even.  We will eventually have future postoperative photos for comparison.

Difficult breast revision surgeries require experienced Board Certified Plastic Surgeons who have dedicated their lives to reconstruction revision of the breast.