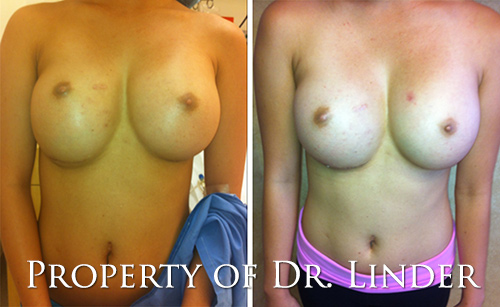 The patient presents with severe bottoming out of the right breast, requiring reconstructive surgery, including a superior right open capsulectomy, reshaping and opening up the upper pole of her implant pocket, as well as performing an internal inframammary capsulorrhaphy suturing the release capsule approximately 1.25 inches up.  Subsequently, the inframammary skin was then removed, performing an inframammary tightening procedure.  Her preoperative photos show not only disproportionately too large implants for her, but improper positioning of the implant causing raising of the nipple and bottoming out of the implant down approximately 1.25 inches below the left side.

Bottoming out is a severe complication and can be very difficult to repair, especially with thin capsules.  Luckily, this patient has thicker capsule that could be released from the pectoralis major and superior rectus abdominis muscle attachments and acting as a sling to allow the implant to be elevated to regain symmetry.