Breast Augmentation Above versus Below the Muscle

Breast implants can be placed either above or below the muscle or placed within the dual plane, which means two-thirds under and the lateral one-third over. 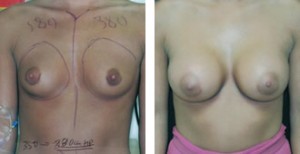 At my Beverly Hills breast augmentation practice, we prefer to place the implants behind the muscle whenever possible because it helps to reduce scar tissue, capsular contracture as well as constantly reduce risk of rupture of the implants.

Placing the implants behind the muscle is important because of the pectoralis major muscle acts to lubricate the implant and it helps to reduce scar tissue formation around the bag. This has been shown throughout several decades of studies. The implants should be placed either subpectoral or using the dual plane technique with two-thirds placed under the muscle along the parasternal ridge, along the infraclavicular and out towards the lateral pectoralis minor muscle.

Implants that are placed above the muscle look more unnatural. They also are rounder in shape in the upper pole and often appear to look fake. Implants placed behind the muscle have a more natural shape, hold better, and have less sagginess and less degree of ptosis as time goes on. The muscle acts to keep the implant up, acts as a sling and reduces sagginess to the breast.

In 2009, most saline and silicone implants should be placed behind the muscle or subpectorally in order to maintain its shape over time and create a more natural appearance and reduce the capsular contracture or scar tissue formation.

Please visit www.drlinder.com which shows severe cases of implants with encapsulation where the implants have been placed above the muscle, which has led to increased scar formation and a disfigurement of the breasts.