This patient presents from Missouri, having had three operations for her breast enhancement. She has consistently had problems, including right breast double-bubble breast deformity with superior retropositioning of the implant and skin laxity of the lower pole. Also, there is severe bottoming out of the left breast where the implant is placed too low. She underwent a vertical mastopexy; however, the skin inframammary fold was never addressed and the skin laxity remains. She now presents for her first surgery with us in order to have this reconstructed.

In her preoperative photograph, it is evident that the upper pole of the right breast is quite full. There is also skin laxity on the right nipple and is significantly lower than the left side. On the left breast the implant is positioned quite low and there is increased skin laxity along the inframammary fold. The operation included both scar tissue removed, an open capsulectomy of the right breast, as well as an inferior open capsulotomy, releasing the implant bringing it down, as well as repositioning of the nipple areolar complex by doing a complete lift, that is, a formal mastopexy using the inverted-T or the Wise-pattern technique.

Specimen of the capsule removed is shown. The formal mastopexy was performed on the right and on the left a vertical T mastopexy with the specimens now showing skin removed (specimen #2) with 6 cm of skin removed from the inframammary fold reducing her bottoming out from 13 cm down to 7 cm. The implants were also replaced to regain symmetry with slightly different implants. High profile saline implants, 320 cc filled to 330 cc on the right, and 350 cc filled to 380 cc on the left, allowed volume symmetry. 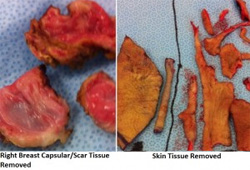 Her postoperative Day 1 photographs are shown. With the bra open, note the upper pole fullness is even. The nipple positions are also the same level and that there is no longer bottoming out of the left breast. With the Linder Bra in place notice the cleavage is enhanced, there is great upper pole fullness with symmetry and the breasts are even. This is the case of a very difficult breast reconstruction where the patient actually presented with two problems, a double-bubble deformity (implant too high) and bottoming out (implant too low). By performing the correct surgery, i.e., a formal mastopexy rather than a vertical lift, it was quite easy to regain symmetry, narrow the breast with high profile saline implants and have upper pole fullness with symmetry as well. 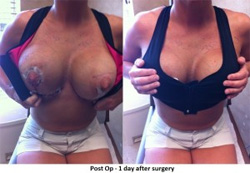